Occam’s razor is about assumptions, not simplicity 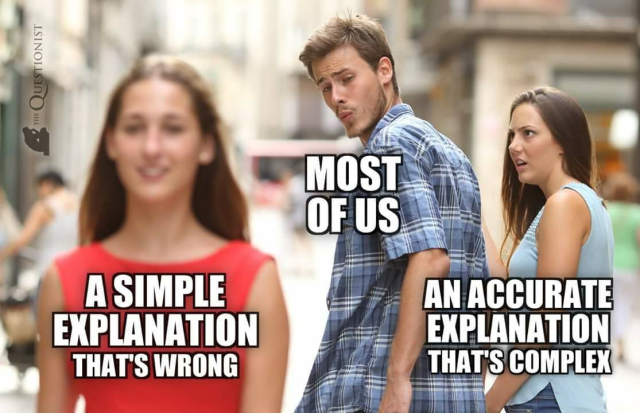 Occam’s razor is an important tool for critical thinking, and it is employed constantly in science. Nevertheless, it is often misunderstood and is frequently (and erroneously) stated as, “the simplest solution is usually the correct one.” This is an unfortunate and misleading way to phrase the razor, because it leads people to conclude that conceptually simpler hypotheses are more likely to be correct, and that isn’t actually true. I have, for example, shared images like the one above multiple times on my blog’s Facebook page, and almost without fail, someone responds to them with something to the effect of, “Occam would have something to say about this.” The reality is, however, that Occam’s razor is actually about making assumptions, not conceptual simplicity. In other words, a “simple” hypothesis is one that doesn’t make unnecessary assumptions, not one that is conceptually simple.

I will elaborate on what I mean by unnecessary assumptions in a moment, but first I want to talk a bit more about conceptual simplicity. If you have ever really studied science, then it should be obvious to you that reality isn’t simple. Indeed, the history of science is largely the history of replacing a conceptually simple understanding of nature with an increasingly complicated understanding. In the pre-science era, many people had a very simple understanding of nature. There were only four elements, the earth was the center of the universe, etc. Those ideas were all replaced with far more complex scientific explanations, but those complex explanations are correct.

This accumulation of complexity happens constantly within science. Gravity provides a good example of this. Newton’s understanding of gravity was far simpler than the more complicated general relativity model proposed by Einstein, but that doesn’t make Einstein wrong nor does it mean that he violated any guidelines of logical thought by proposing it. Indeed, science has repeatedly confirmed that Einstein was right, and we need his conceptually complex model to account for how nature works. Biology has gone through similar revisions. Our modern understanding of evolution, for example, is far more complicated and nuanced than what Darwin proposed. There are many additional (and very correct) layers of complexity that have been added to our understanding over the years (e.g., neutral evolution, punctuated equilibrium, etc.). Indeed, most, if not all, branches of science have experienced similar increases in complexity, and that’s fine. It doesn’t violate Occam’s razor.

Note: In the examples above (and many examples for core scientific topics), the original idea was not wrong so much as incomplete. Darwin and Newton were mostly right, there were just some special circumstances that they weren’t aware of.

Assumptions are the heart of what Occam’s razor is actually about, and the correct way to state the razor is that you should never make more assumptions than are strictly necessary. This concept, sometimes referred to as parsimony, is a guiding principle of science. Everything should be based on evidence and known facts, and the further outside of the known you have to step, the more likely you are to be wrong.

If you think about this for a second, it should make good, intuitive sense. Assumptions are, by definition, things that may or may not be true. Thus, the more potentially untrue components your hypothesis has, the higher the probability that it will be wrong. We can describe this mathematically. Let’s say, for sake of example, that you have a hypothesis that makes one assumption and there is a 90% chance that your assumption is correct (pretend we know that somehow). Watson also has a hypothesis, but his hypothesis makes three assumptions, each of which has a 90% chance of being correct. Your hypothesis only has a 10% chance that its assumption is wrong; whereas for Watson’s hypothesis, there is a 27% chance that at least one of the assumptions is wrong. Thus, it is obvious that his hypothesis is less likely to be correct (see this post for probability calculations).

In case math isn’t your thing, we can use some every-day examples to illustrate this as well. Imagine that you get in your car and try to start it, but when you turn the key, the engine won’t start. It won’t even turn over. Now, there are several possible hypotheses. The most obvious three are that it is the battery, starter, or alternator, but let’s say that you have an additional piece of information. Let’s say that yesterday you had your alternator and battery tested, and they both checked out as fine. Now, which of those three hypotheses is more likely to be correct based on the information you have? It’s obviously the starter, right? You just had the other two tested, so it’s reasonable to conclude that they likely aren’t the problem. This is a perfectly rational and intuitive conclusion, but when we break it down, it’s really just an application of Occam’s razor. Consider, the starter hypothesis proposes only one unknown: there is something wrong with the starter. In contrast, both the battery and alternator hypotheses require additional assumptions, because not only must there be something wrong with one of those car parts, but you also have to assume that the test equipment you used yesterday was faulty, or that a problem happened to develop right after being tested, etc. You have to make an assumption that is not required for the starter hypothesis.

To further illustrate this, we can construct hypotheses with additional assumptions. I could, for example, propose that the starter, battery, and alternator all died simultaneously. Now I have multiple assumptions running, and I trust that it is clear that it is unlikely for all of those things to have gone bad at the same time. We can make it even more ridiculous though by also assuming that in addition to those three parts, the ignition coil, spark plugs, and spark plug wires are also dead (see note). Do you see my point? Every time that we add another unnecessary assumption, the odds of the hypothesis being correct go down. We don’t need to be making assumptions about spark plugs, ignition coils, etc., and therefore we shouldn’t. We should work with what we know and add other assumptions only if they become strictly necessary.

Note: Yes, I know that bad spark plugs, spark plug wires, and the ignition coil(s) would not prevent the engine from turning over, but that only further illustrates the absurdity of assuming that they also stopped working.

I want to segue here briefly into a related topic: ad hoc fallacies. These fallacies are prevalent in anti-science arguments, and they are fundamentally failures to apply Occam’s razor. They occur when, after being faced with evidence that defeats your position, you invent a solution (i.e., make an assumption) that serves no function other than attempting to patch the hole in your argument.

Let me give an example. Suppose that a friend is with you when your car won’t start, and suppose that you have bragged to him repeatedly about how your car is impervious to faults and can’t break-down. Thus, upon seeing your car’s failure to start, he snidely says, “so much for your car never breaking down.” You are, however, unwilling to acknowledge that your car is capable of having flaws, so instead, you claim that someone must have sabotaged it. That is an ad hoc fallacy. You arbitrarily assumed that someone sabotaged your car even though you have no evidence to support that claim and even though it breaks Occam’s razor by making unnecessary assumptions.

This brings me to my final point. Namely, the quality of the assumptions matters as well as the quantity. In other words, some assumptions are more justified than others. Someone could, for example be pedantic about my car example and argue that saying that the starter died and saying that the starter and spark plugs died both make the same number of assumptions because the first one implicitly assumes that the spark plugs did not die. It should be obvious, however, that (unless you have been having perpetual problems with your car) the default position should be to assume that things work. Every time that you get in your car, you’re implicitly assuming that all of its necessary parts work. Technically, you could argue that the opposite hypothesis (i.e., that none of the parts work) makes the same number of assumptions, but one set of assumptions is clearly more justified than the other (the reasons behind that get into inductive logic and the burden of proof and other concepts that I don’t have time to go into here). The same is true in science and debates. It is not valid to, for example, assume that the entire scientific community is involved in a massive conspiracy, and you can’t try to validate that assumption by saying that everyone else is assuming that the conspiracy doesn’t exist. Those two assumptions are not equal, and you need some concrete evidence before you can claim that there is a conspiracy.

In short, Occam’s razor does not state that the simplest solution is more likely to be correct. Rather, it says that the solution that makes the fewest assumptions is more likely to be correct; therefore, you should restrict your assumptions to only the ones that are absolutely necessary to explain the phenomena in question. A solution can be very complicated and still likely be correct if it is based on facts, not assumptions. Indeed, the answers science produces tend to be conceptually complex, and the history of science is a graveyard of simple ideas that were replaced with more complex ones.

This entry was posted in Rules of Logic and tagged ad hoc fallacies, burden of proof, Occam's razor, rules of logic. Bookmark the permalink.

26 Responses to Occam’s razor is about assumptions, not simplicity