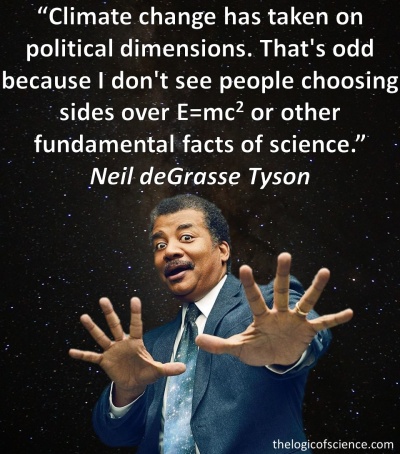 On this blog/Facebook page, I try very hard to stick to scientific facts and avoid discussing politics. Nevertheless, I am frequently accused of being political, even when I am simply reporting a fact. For example, I often post facts about climate change, such as the fact that 2014, 2015, and 2016 all set new records for the warmest year (on average), and when I do that, I nearly always receive comments accusing me of “liberal propaganda” or “pushing a liberal agenda,” but that’s not how facts work. It is demonstrably true that all of those years were the warmest on record, and politics has absolutely nothing to do with it. In other words, facts are inherently not political. They are simply statements of reality. To be clear, facts can, of course, be used to make political arguments and to try to persuade people of a particular political position, but the facts themselves are not political, and that distinction is important.

Let me give an example that I recently encountered which will hopefully demonstrate how this plays out and why it is problematic. This example is from a historical topic, not a scientific one, but I think it illustrates the situation nicely. A few days ago, I saw a clip from Adam Ruins Everything where Adam discussed the history of racism in the US housing markets as well as the lingering effects of that racism. At no point in the video did he make any political statements or arguments. He simply explained the facts (the things that are demonstrably true), and he cited his sources. In other words, he simply made claims like, “bill X was passed which did Y,” and at no point did he give a call to action, advocate for a piece of legislation, etc. He even went out of his way in the video to say that he is simply reporting the history, not trying to guilt white home owners.

As you have probably guessed, however, many of the comments on this video were simply amazing. In the various places that I have seen this video show up, I have seen tons of comments complaining about “liberal propaganda,” “white guilt,” etc. For example, one commenter wrote, “This is just anti-white propaganda,” but, again, all he did was report facts. Also, to be clear, these comments weren’t citing sources showing that the facts in the video were wrong, rather they were simply accusing the video of being political nonsense (in this case liberal nonsense) .

This general reaction can be summed up best with the comment below.

Again, that’s not how facts work. Simply stating historical facts is not the same thing as making a political argument. Arguing for an action based on those facts would be political, but simply teaching people the facts is not political. Nevertheless, people often respond to facts as if they are political, and the great irony is that this reaction often occurs precisely because of political biases. In other words, someone sees a fact that causes some problem for their political ideology, so instead of dealing with the fact, they accuse the fact itself of being politically motivated. This is extremely problematic for obvious reasons. We can’t hope to have a rational discussion about a topic (whether it be scientific, historical, political, etc.) if people don’t accept that basic facts. Any position that ignores facts is doomed to fail.

Note: To be clear, I am not making any general statements about the accuracy of Adam Ruins Everything, but in this particular case, he was simply reporting historical facts.

This situation plays itself out all the time on scientific topics, but climate change is probably where it occurs the most frequently, and I don’t fully understand why, because if I make a statement like, “the earth is a spheroid,” no one accuses me of making a political claim. Everyone realizes that I am simply reporting a fact; however, when I state something like, “we have greatly increased the CO2 in the atmosphere, and that CO2 is causing the planet to warm” suddenly people accuse me of pushing a liberal agenda and my inbox is flooded with comments to the effect of, “I thought this page was about science but it is just liberal nonsense.” Do you see the problem there? It is a fact that our CO2 is causing the climate to change, and I always back that fact up with my sources (detailed in previous posts such as this one and this one), but people mistake that fact for a political argument. To be clear, people can certainly use that fact to make a political argument, and when someone says, “we are causing the planet to warm, therefore we should do X,” at that point they are making a political argument, but the fact itself is not political. In other words, whether or not we should do something about climate change is going to depend moral values, views on economics, etc., but none of that is relevant to the simple fact that we are causing the climate to change.

Note: I realize that both of my examples so far have involved groups who are generally politically conservative (by the US definition), but just to be clear, liberals do this all the time as well.

So far, I have been focusing on the accusation that a fact is political, but this same general problem occurs in other ways as well. For example, when I sate a fact about the effectiveness or safety of vaccines, I am often met with accusations of spreading “pro-vaccine propaganda,” but, as I have stated several times now, that’s not how facts work. Simply stating a fact is not propaganda. To put that another way, the definition of propaganda is not, “a fact that I don’t like.”

Here again, I want to be clear that facts can be used as propaganda if they are reported in a misleading or biased way to push some agenda. For example, anti-vaccers like to cite the fact that in some disease outbreaks, most of the people who became infected were vaccinated. That fact is technically true (in some cases), but using it as an argument against vaccination is misleading and leaves out critical information. Namely, it ignores the fact that the rates of disease are consistently higher among the unvaccinated. In cases like that, you could argue that the argument is propaganda, but even there, it is not the fact itself that is the problem. Rather, the problem is the misleading way in which it is presented. Also, generally when I see people making blind accusations that something is propaganda, the fact wasn’t being in any way miss-represented. Rather, people were making the accusation simply because they didn’t like the fact.

Finally, the same basic problem occurs for topics that have any sort of religious implications. For example, when I talk about the facts of evolution such as the existence of transitional fossils or the fact that evolution predicted genetic patterns, I’m nearly always met with creationists who accuse me of pushing an atheist agenda. You can see an example of this if you look at the meme on the right. I made the original meme (green), and a creationist group tried to “correct” it (including calling it propaganda), and I corrected it back. Here again, I simply stated a scientific fact that has been repeatedly demonstrated by fossils, genetics, biogeography, etc. It is in no way cherry-picked or misleading. To be clear, that fact certainly does present serious problems for young earth creationists (but not theistic evolutionists), but that doesn’t make it propaganda or religious. The fact itself is simply a statement of reality. To put that another way, the fact is relevant to the topic of religion, but religion is not relevant to the fact.

In short, facts are not political, religious, or propaganda. They can be used to make political or religious arguments, and they can even be misrepresented and used as propaganda, but the facts themselves are neutral statements of reality. So, when someone says something like, “vaccines save thousands of lives each year” they are stating a fact, not propaganda. Similarly, when they say, “numerous studies have tested the natural drivers of climate change and found that they cannot explain the current warming,” that is not a political argument, it is a simple, demonstrable fact, and politics have no bearing whatsoever on it.

It is very easy to dismiss information that you don’t like as propaganda, but doing so is intellectually dishonest and you do yourself a disservice by giving into that type of cognitive pitfall. To be clear, you should fact check and make sure that a claim is true, the fact wasn’t cherry-picked or misrepresented, etc., but don’t fall into the trap of blindly asserting that anything that disagrees with you is politically motivated or agenda driven.

Note: Although I have no interest in debating the Adam Ruins Everything video, I will note that many commenters harped on the use of the phrase “insufferably white” at the beginning, and argued that it meant that the video was propaganda. I would respond to that first by reminding everyone that the show is supposed to be comedic and that was meant to be a joke. Second, that was the only part of the video that was even remotely political. Everything else was simple statements of facts. Again, he listed his sources, so it is easy to fact check him.