Evolutionary mechanisms part 1: What is evolution? 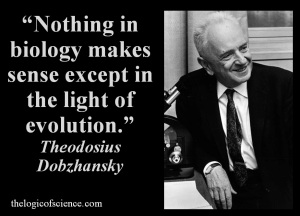 I am utterly enamored with evolution. To me, it is not only the central concept of biology, but it is the single most interesting topic in all of science. Nothing fascinates me as much as evolution. Unfortunately, when I tell people about evolution, I am usually debating creationists rather than simply teaching. This irritates me because I really prefer to think of myself as a science educator rather than a debater, and I would prefer to spend my time explaining the marvelous intricacies of evolution, rather than wasting it trying to convince someone that dinosaurs and humans never coexisted. Therefore, I have decided to briefly forgo the argumentative topics that characterize this blog, and instead write a series simply explaining evolution and why it is so freaking cool. My experience has been that even most people who accept evolution don’t really understand it, and most creationists reject it largely because they don’t understand it. So I hope that this series will be of wide interest regardless of whether or not you accept evolution as the fantastic scientific fact that it is. In this first post, I will simply lay the basic groundwork, and in future posts, I will explain the details of the different evolutionary mechanisms (selection, gene flow, genetic drift, and mutation). Throughout this series, I will use a simulator to illustrate how these mechanism operate.

If you ask a group of people to define evolution, you will get a wide range of answers, almost all of which will be wrong or at least incomplete or inaccurate. Part of the problem stems from the fact that the term “evolution” can mean several different things. At the most basic level, we have the process of evolution. This is simply the change in the genetic makeup of a population over time. At a higher level, we have the fact of evolution. This is the scientific fact that life on earth has evolved over billions of years (despite what creationists will tell you, this fact has been repeatedly confirmed by genetics, the fossil record, biogeography, etc., and it is settled science). Finally, at the highest level, we have the theory of evolution by natural selection. This is the theory that natural selection has been the dominant mechanism that has caused evolutionary change.

Let me describe the relationship among these three uses of the term “evolution” another way. The process of evolution can happen through a number of different mechanisms (genetic drift, selection, gene flow, and mutation). All of these cause the genetic makeup of a population to change from one generation to the next. These small changes (what are often called microevolution) accumulate over time, ultimately resulting in large changes which are often referred to as “macroevoltuion.” There is no difference in the mechanisms of micro and macroevolution. Rather, macroevolution is just an accumulation of microevolutionary steps, and it is a fact that those changes have been slowly accumulating over billions of years, ultimately resulting in the evolution of all of the living things that we see today. Nevertheless, the question remains, what caused the evolution? This is where the theory of evolution comes in. Remember, theories always explain facts, and the theory of evolution by natural selection explains the fact of evolution by proposing that natural selection is the primary mechanism that has driven the process of evolution throughout the history of life on earth.

The process of evolution: simple genetics

Throughout this series, my focus is going to be on the process of evolution, and I want to specifically look at the various mechanisms of evolutionary change, but first we need to get several terms and definitions straightened out. The best way to define the process of evolution is, “a change in the allele frequencies of a population over time.” The two important parts of that definition are “allele frequencies” and “population” so let’s look at each of them.

Allele frequencies
Hopefully everyone reading this realizes that most of your traits are controlled (at least partially) by your DNA, and those traits can be passed onto your offspring. If I asked you, for example, why your eyes are the color that they are, you would probably say, “because I got the genes for that eye color from my parents.” That response would, however, not actually be correct. You see, most people say “gene” when they really mean “allele.” A gene is just a section of DNA that codes for a specific type of trait. So, for example, you have a gene for eye color (actually several, but more on that later), but the gene doesn’t actually determine what color your eyes will be, the alleles do that. For most genes, there are multiple alleles and the alleles determine the expression of the gene. Thus, you don’t get the gene for blue eyes. Rather, you get the gene for eye color and the alleles for blue eyes.

A common example of this is the pea plant. Pod color in pea plants is inherited through complete dominance, and is typically illustrated using a dominant green allele (G) and recessive yellow allele (g). Hopefully you all remember high school biology, but I will briefly review just to be sure. For each gene, an individual has two alleles (one from each parent), but which allele will get passed onto their offspring is random. Thus, if a pea plant was Gg, on average, 50% of its offspring would receive the dominant allele (G) and 50%would receive the recessive allele (this randomness is going to become very important in later posts on genetic drift). Further, which alleles an individual receives determines how the gene will be expressed. In complete dominance, the dominant allele completely masks the recessive allele, so both Gg and GG individuals will be green. Thus, green is their phenotype (the expression of the alleles) whereas Gg and GG are the genotypes (the actual alleles that they possess). The only way to get a yellow phenotype is to receive two recessive alleles (gg).

Finally, it’s important to realize that most traits are polygenic (i.e., influenced by multiple genes), and most genes have many different alleles. Thus, while we often use simple examples that involve only one gene with two alleles, most traits are considerably more complicated than that. In fact, even most of our text book examples are actually very complex and are not nearly as simple as we are led to believe in introductory courses (you can find good explanations of many of them here). This is extremely important because these polygenic, mutli-allele traits provide extraordinary variation for evolution to work with, and, as I will explain more in future posts, most evolutionary mechanisms require variation.

I have mentioned the various evolutionary mechanisms several times now, and each of them will get their own post later on, but for right now, I want to give a brief definition of each of them. I also want to note that even young earth creationists accept these mechanisms (with the possible exception of mutations). They simply make the absurd and ad hoc claim that accumulating small changes somehow doesn’t lead to a large change.

Natural selection
This is the most well known mechanism. The concept is really quite simple: individuals with the best alleles will survive better and produce more offspring than individuals with alleles that are not as useful. Thus, by virtue of the fact that individuals with good alleles produce the most offspring, there will be proportionately more good alleles in the next generation. In other words, the allele frequencies shift from one generation to the next, with the beneficial alleles gradually becoming more common.

Mutation
Mutations are random changes in the genetic code. They are usually neutral, but a small subset are beneficial and a small subset are harmful. Mutations are extremely, extremely important for evolution because they are the only way to generate new genetic information. Both selection and genetic drift actually remove variation from a population. Conversely, gene flow can add variation to a population, but it doesn’t actually create new genetic material. Rather, it simply moves it between populations. Thus, without mutations, species would slowly loose genetic variation until eventually, all individuals would be genetically identical.

At this point, I have covered the essential basics of what evolution is, and how it works. Because I was just trying to go over the fundamentals, this post has probably been fairly dry and boring, but I expect future posts to be far more interesting as we delve into the details of the evolutionary mechanisms. So stay with me, and by the end of this, I think that you will agree that evolution really is the most glorious and fascinating process imaginable.

Other posts on evolutionary mechanisms:

5 Responses to Evolutionary mechanisms part 1: What is evolution?